In addition to two terms on our school board, I bring over 40 years of experience as a teacher and administrator. 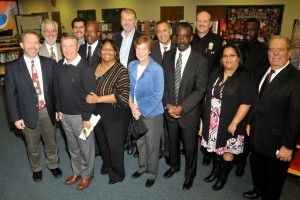 The superintendent, board and community members at the launch of the Jordan High School Initiative

I’ve worked collaboratively to support Superintendent Chris Steinhauser and his team during a tough financial crisis. Our teamwork and the commitment of teachers, principals, staff and parents contributed to the steady improvement of student test scores!

In July, I was elected President of the Board. Our board works well together. In a second term we’ll continue to collaborate to improve student learning.

With then State Senator Lowenthal and L.A. county librarians

As Dean of the Library and Learning Resource Center at Cerritos College, I hired, supervised and evaluated faculty and support staff, managed large budgets, and promoted reading and educational technology to benefit students of diverse and rich cultures.

I won millions of dollars in state funds to rebuild the library and over $300,000 in a capital campaign to purchase an online information system. With the unanimous support of the Faculty Senate, College Budget Committee and College Board of Trustees we were allocated a $200,000 annual book budget, one of the largest of any college in the state.

With Syd Davidson, the founding NHHS principal & superintendent, prior to the PTA award ceremony

I was appointed to the State Policy Board of the California Reading and Literature Project (1994-97). I also served as the Governor’s appointee to the State Board of the Education Council on Technology in Learning (1996-98), which oversaw Digital High School Grants and other technology funds.

GRAND JURY
Service to the Community

While on leave from Newport-Mesa USD (1980-81), I served on the Orange County Grand Jury, where I chaired the General Services Committee. I authored two major reports. The first was on the county supervisors’ acquisition of a new computerized vote counting system. The second was on the county’s plan to expand John Wayne Airport.

The heart of every school is the classroom where, with parents' support, children learn and teachers teach.